http://www.jubileeinitiative.org/sacredmichigan.html
Michigan Street Baptist Church,
Underground Railroad Stop, Buffalo, NY
One of the many places of Prayer in Upstate NY.

For the seeker looking for a divine connection and a chance to tap into the consciousness that drives the prophetic spirit one would be well served with spending time at the Michigan Street Baptist Church, 511 Michigan Avenue in Buffalo, NY. It has both a rich history of social justice and a precious piece of Mother Earth’s soul.
Prophetic Spirit 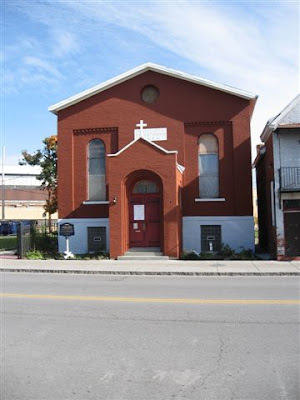 Michigan Avenue ran through the heart of Buffalo’s African American community in the pre Civil War period. The congregation that would become the Michigan Baptist church began forming between 1832 to 1837. Construction of the church started in 1845 and was completed in 1846. As the sole Black institution at a time of slavery, the church served as a gathering place, a place to advocate reform, a sanctuary and a place of hope and God; for many, particularly the numerous ex slaves in the congregation, religion and the church were the strongest sustaining force in their lives.
The church has a rich history of social justice. In 1842 it adopted a statement declaring slavery immoral, provided a speaking forum for abolitionists such as Fredrick Douglas and was an Underground Railroad station. Its parishioners were similarly strong and vocal advocates of the prophetic spirit.
Dr. J. Edward Nash who became pastor of the church in the 1890s and remained there for 61 years helped found the Buffalo Urban League and the local branch of the NAACP.
Mary Talbert, lived at 521 Michigan Avenue, two doors from the church (now demolished), right next to a piece of Mother Earth’s soul. In 1905
W.E.B. Dubois and other prominent African American leaders met secretly at Mrs. Talbert's home and founded the Niagara Movement, the forerunner of the National Association for the Advancement of Colored People (NAACP).
She served as president of the National Association of Colored Women's Clubs from 1916 to 1920, as a vice president of the National Association for the Advancement of Colored People (NAACP) and was a delegate to the International Council of Women held in Norway. In 1922, Mary Talbert was the first woman to the NAACP Springarn Award for outstanding achievement. For a listing of the many women to come out of Michigan Baptist and leave their mark on the community read Black Women Organizations.

Experiencing the Church
There are several places to experience
Mother Earth’s soul on the church grounds. There a two stacked fields (2) of consciousness on the grounds. A stacked field 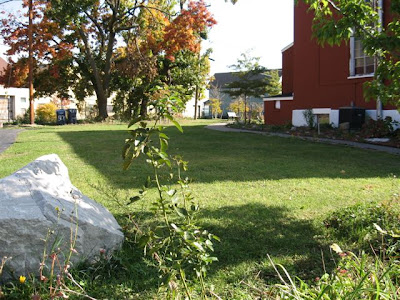 occurs where more than one (1) field is located in the same place. Stacked fields give a stronger sense of consciousness. As I note in Mother Earth Prayers great people and great events are associated with Mother Earth’s soul.
One stacked field of consciousness is located in the grassy lot on the north side of the church beginning about 3 feet from the walkway. This would be a great place to meditate or have a contemplative walk. There is a natural vortex of prana that has formed on the northeast part of the lot. It is located directly across from the back exit and about 10 feet south of the driveway (which is located north of the lot.) Such a vortex is an indication that good thoughts and actions have transpired in the area. This would be a good place for healing or replenishing yourself.
The other stacked field of consciousness is located in the back of the church in the garden and encompasses the area around the bench and the circle. This would be another place to meditate or ask for inspiration and guidance.
The areas mentioned all have a good vibe and the geographic samskaras are all positive. I was not able to enter the church the day o 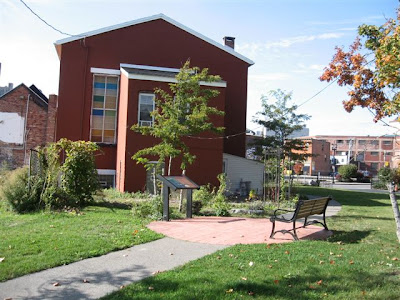 If you go
Check church hours and church website.
Bring a cushion or something to sit on for outside.
For a listing of the many women to come out of Michigan Baptist and leave their mark on the community Black Women Organizations.
To read more on the history of the church go to: Monroe Fordham Regional History Center.
Pictures of the church Buffalo architecture.
Peace,Madis SennerIn emailing me make sure to change (at) to @ in the address header: madis senner
Back to Mother Earth Prayers
Posted by madis senner at 6:09 AM No comments: