Scotts Bluff, Wolcott, NY
One of the many places of Prayer in Upstate NY.
Scotts Bluff located on the shores of Lake Ontario in Northern Wolcott NY (halfway between Rochester and Syracuse) offers the pilgrim great views, beach access and a sweet piece of Mother Earth’s soul. If you are looking for a serene location on a beach to meditate at and not be bothered try Scotts Bluff.
The Bluffs
Scotts Bluff is located less than 10 miles east of Chimney Bluffs State Park and is part of the NY DEC land management. It is known as The Red Creek part of the Black Creek Wildlife management area.
The area between Rochester and Oswego is noted for its drumlins, or rolling hills. There are also numerous spectacular bluffs near and on the shore. Fortunately the DEC owns several strips of land just east of Sodus Bay on Lake Ontario.
Experiencing Scotts Bluff
The entrance area and parking lot is situated on a plateau overlooking Lake Ontario. To the right you will get a nice view of Scotts Bluff. You may wish to spend some time above, be aware that the grassy area on the bluff may not be mowed. This is DEC land and it is not well maintained. There are no facilities here.
To get to the beach look for a herd path to your left in the woods. The trail to the beach is about 50 to 100 yards in length.
The beach is about a mile in length and depending upon when you visit may have a few people or none at all on it. To your right (east) is Scotts bluff. To your left (west) are the fields of consciousness, located a couple of hundred yards down.
As you walk west you will begin to see an inland marsh to your left. The fields are located about 40-50 feet east of the narrowest part of the barrier, a narrow sliver of land, which divides the Red Creek marsh from Lake Ontario. There are several stacked fields(4) of consciousness located in front of an American Willow and a large downed tree. Very Nice.
I am told that a heavy ran can overrun the barrier separating Red Creek Marsh from Lake Ontario. When this happens a little waterway forms between the marsh and Lake Ontario at the center of the marsh, where the barrier is the thinnest. Again this thin part of the barrier serves as a point of reference to indicate that the fields of consciousness are located 40-50 feet to the east. People canoe and explore the marsh area.
The beach is covered with Lake Ontario stones and provides for a beautiful walk. You will also find lots of brownstone, or sandstone, throughout.
Getting There
If you have never been to nearby Chimney Bluffs State Park it is certainly worth a visit for its spectacular views and bluffs.
From Wolcott take East Port road to Brown, take the second right onto Cemetery/Kyle (Cemetery turns into Church and then into Kyle) road. Take a left onto Broadway. Follow Broadway past Kakat all the way to the end.
Reference: The Edge Walker’s Guide to Lake Ontario Beachcombing, by Susan Peterson Gateley, 2003.
Thanks to Lorraine Mavins for her photography and assistance.
Peace,In emailing me make sure to change (at) to @ in the address header: madis senner
Madis Senner 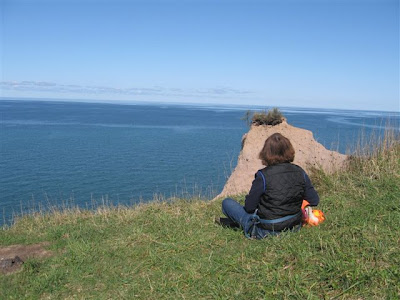 Back to Mother Earth Prayers 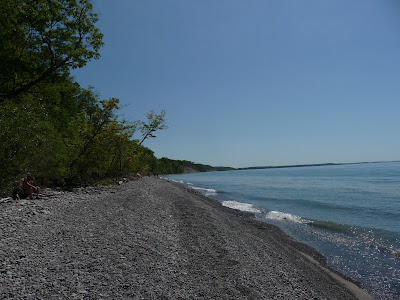 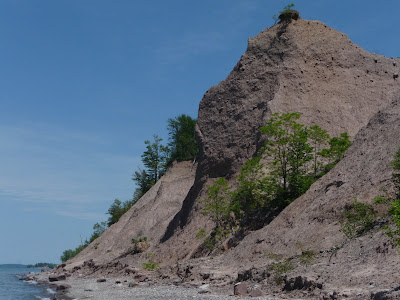 Posted by madis senner at 5:20 PM No comments:

For those interested in yoga, meditation and Eastern spirituality Swami Vivekananda’s cottage in the Thousand Islands Park provides a unique opportunity to visit a sacred place and participate in a group meditation. The Cottage is opened up each summer for the months of July and August by members of the NY Ramakrishna Vivekananda Center of NY (http://www.ramakrishna.org/.) There is a daily meditation and satsang (singing and chanting), called an RT, that takes place at 4:30 and lasts about an hour. All are welcome but it is suggested to call in advance: 315 482-3031

Swami Vivekananda is credited with introducing yoga and Eastern spiritual practices to the West in 1893 when he spoke at the World Parliament of Religions in Chicago.

In 1895 he spent 7 weeks at the cottage of Miss Elizabeth Dutcher on Wellesley Island teaching and sharing his knowledge. It is here that he achieved the highest state of Samadhi (nirvikalpa), a meditative state where one’s consciousness soars. Vivekananda would later say that his stay at Wellesley Island was a “momentous period” of his life. His biographer, Swami Nikhilananda founder of the Ramakrishna Vivekananda Center, says that his insights and spiritual powers blossomed while there.

Directions from 81 north 1) Pay toll and cross Bridge onto Wellesley Island and take first exit (Exit 51)
2) After exiting proceed to stop sign, turn right and go to second stop sign.
3) At second stop sign turn right, and proceed about 4 miles to the village of Thousand Island Park.
4) At Thousand Island Park proceed to stop sign (near Grocery, Ice Cream Parlor, Tennis Courts).
5) At stop sign turn right onto St. Lawrence Avenue and proceed about 2 blocks until the street ends at Tabernacle building.
6) At Tabernacle turn left, go about one block and turn right up the small road marked with the arrow pointed to “Vivekananda Cottage.” (See map below).

For a review of Vivekananda’s cottage and more information go to: http://www.jubileeinitiative.org/sacredvivekananda.html

Vivekananda’s cottage is one of many sacred sites in upstate NY. For a detailed listing of other sites, go to Mother Earth Prayers and click on sacred sites: http://www.motherearthprayers.org/
Posted by madis senner at 3:26 PM No comments:

More pictures and 2 videos of the stone mounds at the top of South Hill have been added to the Clarks Gully Blog: http://clarksgully.blogspot.com/

On July 4, 2010 we went to South Hill (where the Seneca people believe that they were born) for prayer and to survey the area some more. On the Upper Part of the Hill, in the Ledges area on the western side of the gorge we found an elongated Stone mound on one of the lower ledges. Again we believe that the many mounds on South Hill were created by the Adena, meaning that they are probably 2500 to 3500 years old. Read my earlier posts and you will find that my rationale is based upon the work of Dave Robinson and his analysis of NY State Historians Ritchie and Parker.

To read the rest, see pictures and videos: http://clarksgully.blogspot.com/
Posted by madis senner at 10:02 AM No comments: