I have made several posts  about China's excessive and blatant destruction of Mother Earth, even noting that Mother Earth will eventually choke off China's economic boom and bring it back to earth. The world will not survive if China continues to thrive as it has.

Wild Aid has launched a campaign to raise awareness about the problem of air pollution in China by lampooning it with a commercial showing people growing excessive nose hair to survive. From Wild Aid;

"The first major PSA from GOblue, "Hairy Nose" is an eye-catching and thought-provoking concept that projects the issue of air pollution into the distant future. In this world, nose hair has evolved to filter pollution and has led to activities, fashion and culture centered on the now prominent facial features. In the face of this, one man refuses to accept the pollution and shaves his nose hair in defiance. The message for current urban residents is clear: Change air pollution before it changes you."


'Hairy Nose' - WildAid China & GOblue from WildAid on Vimeo.
Posted by madis senner at 6:53 AM No comments:

While the focus of this blog is on Mother Earth I could not resist talking about the influence of technology given the picture below. It shows Facebook Mark Zuckerberg walking the aisle with a grin as attendees are mesmerized watching virtual reality. It is an image reminiscent of the movie the matrix showing humans in pods full of liquid as their thoughts and being are gobbled up by machines.

The fact is that technology, machines, does gobble up our being. In a sea of consciousness everything is consciousness. All thoughts look to manipulate and control us, when technology whose intention is already control and manipulation and is not serving then the results can be devastating  as I outlined in the The Way Home.

Technology has a stranglehold on us like never before. It seems to have gone in hyper drive with the digital age.

Posted by madis senner at 6:50 AM No comments:

Honeywell's efforts to clean Onondaga lake are not working.

Onondaga Lake is one of the holiest places in the world. It is where the Peacemaker planted the Tree of Peace and gave the Haudenosaunee The Great Law of Peace that shaped America's Founders and gave us democracy. It is the heart of Mother Earth's Soul where numerous and powerful Fields of Consciousness are located. Thousands of Spirit Lines, or Ley Lines, originate from the Fields at Onondaga Lake.

Onondaga Lake is also one the most polluted lakes in America. This has devastating consequences for wildlife and flora, as well as the ecosystem at large. It damaging to people. Pollution is a statement that one does not care about Mother Earth; it says it is all right to disrespect and harm Mother Earth. It is a violent and selfish consciousness.

The sad thing is that when Spirit Lines (Ley Lines) as carriers of consciousness pass over the pollution/toxins they absorb that consciousness. They then care that consciousness to the farthest corners of the world. Is it any surprise that we have an environmental crisis when the heart of Mother Earth's Soul that is meant to send love, compassion and selflessness around the world is polluted?

Posted by madis senner at 9:13 AM No comments:

We had a wonderful group meditation at the First Universalist Church of Central Square  this past Tuesday Feb 2nd. Everyone was able to feel the presence of Mother Earth and Her Fields of Consciousness in the church. Most of us went deep into trance. Several had mystical experiences from seeing orbs, to spirits to a slide show of the churches history of Sunday services, weddings and funerals.

Below is a picture of an orb(s) that appeared in the front of the church by the altar after our group meditation; you can see it on the right side of the painting. Others say that there are other orbs in the picture--by the chair and on the window next to the emblem.

Orbs can be created by a variety of phenomena.  Miceal Ledwith and Klaus Heinemann in their book the Orb Project believe that orbs are either electromagnetic energy of some kind, a torsion field (or vortex), or  emanations from Spirit beings, not the spirit beings themselves.

Personally I believe that the orbs in the picture were either enhanced electromagnetic emanations created by our meditating, or our thought forms. 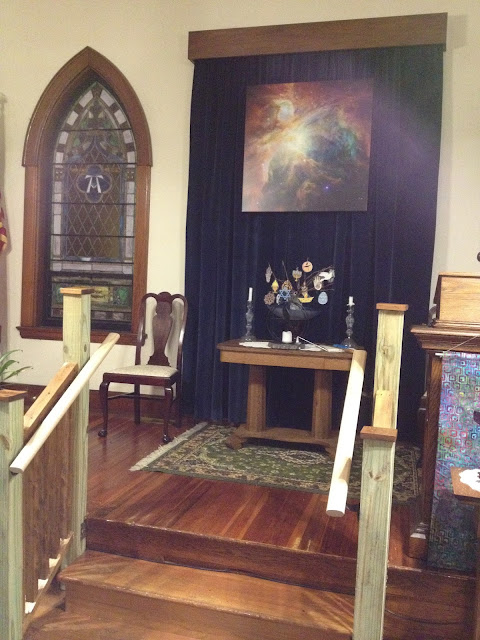 Posted by madis senner at 7:47 AM No comments: