The following article about a Tibetan lama that was able to cure his leg of gangrene through meditation is a testament to the power of the mind over the body. It is also a story about Mother Earth’s curative powers; meditation, mindfulness, loving acts and the like tap into Mother Earth and she responds by sending us what I call Cosmic Prana. Researchers in neuroplasiticity have found that meditation alters our brain and makes us more compassionate. I would argue that certain acts attract Cosmic Prana and it is this nutrient that feeds our brain(subtle body and consciousness) the same way that physical food gives us energy. I talk about this in my book The Way Home—Making Heaven on Earth http://www.amazon.com/Way-Home-Madis-Senner/dp/1846942489/ref=sr_1_fkmr0_1?ie=UTF8&qid=1293386338&sr=8-1-fkmr0 .

To me this article confirms that Healers should be active Meditators as well, because meditation will help you attract higher essences, energies and consciousness beyond Earth Prana, the primary prana that feeds the physical body. What is better yet is meditating with Mother Earth and gaining sentience of her, because when you do you get the full spectrum of what she has to offer and you increase your draw of all of her nutrients, essences and consciousness.

From the Daily Beast

Maureen Seaberg is a NYC-based journalist whose work has appeared in the New York Times, the Daily News, Irish America, ESPN the magazine and on PBS and MSNBC. She won a scholarship to the inaugural Norman Mailer Writers Colony in 2009. She is also a synesthete and synesthesia researcher who is on the organizing committee of the Toward a Science of Consciousness Conference for the Center for Consciousness Studies at the University of Arizona, Tucson. Her first book, about synesthesia, titled Tasting the Universe, will be out in March 2011 from New Page Books.
Posted by madis senner at 10:01 AM No comments:

http://www.jubileeinitiative.org/sacreddansville.html
Church Square--A spiritual Gathering Place,
Dansville, NY
One of the many places of Prayer in Upstate NY.
Imagine a small quaint town where many of its places of worship were located around a town park. Imagine if that town square was nestled upon a precious piece of Mother Earth’s soul and radiated love and consciousness. Church square ( Clara Barton, Church, Liberty & School Streets) in Dansville NY is such a place. Its serene and pastoral feel recalls a bygone era that invites you to slow down and spend some enjoying the moment there.
Clara Barton’s Epiphany
We were drawn to Dansville a few years back to survey Clara Barton’s home in Dansville. It is there that she had her epiphany to start the American Red Cross. I did not write the home up because there were no areas where people could pray.
Clara Barton was not the first one to have an epiphany in the heart of Mother Earth’s soul. Charles Grandison Finney after a walk in the woods in North Adams decided to leave being a lawyer for the clergy and is credited with forming and shaping the Evangelical movement and America’s second great awakening. Trappist Monk Thomas Merton found is calling at Olean NY. There are many more. Clara Barton’s transformation also speaks to the empowerment that women found in the area from the leaders of the women’s movement to those like Harriet Tubman.
Since first surveying the Barton home I have learned that fields of consciousness appear in series. So in the fall of 2010 when we were in area we decided to look for other fields close to the Barton home. My rods immediately led to Church Square when we got there.
Churches in Area
The following Places of worship are located in Church Square. Each has several stacked fields of consciousness within them. A stacked field means that there are several fields of consciousness upon each other. The number can range from 2 to 12 fields upon each other and the more that there are the more powerful will be the consciousness emanating from them.
Dansville Presbyterian Church has a stacked field (8) of consciousness closer to School Street in what appears to be the sanctuary. In other words 8 fields are stacked upon each other. Very nice!
St. Peters Episcopal Church has a stacked field (6) of consciousness towards School Street within the sanctuary.
St Pauls Lutheran is where Clara Barton set up the first local society of the American Red Cross. There is a stacked field (3) the side closer to School Street.
New Bread Ministries has several stacked (2) fields of consciousness within it, closer to School Street.
Church Square Park
Church Square Park is great. Fields of consciousness are located throughout. So any place you go is going to be good. There is a stacked (6) field of consciousness located on the park side of the Presbyterian Church. There is a stacked (5) field of consciousness about 10-15 from the Oak Tree going towards School Street.
The Gazebo is wonderful, it appears to have marked the intersection of 2 Native America trails and been a meeting place. There is a stacked field (3) of consciousness going towards the intersection of School and Liberty Streets. The gazebo also contains the spiritual embers of what I believe may have been a natural vortex. Such vortices form from prayer, ceremony or ritual. This makes sense as Native Americans would often stop, particularly at the intersection of trails to do ceremony. All said the Gazebo is a must visit, meditate at place.
Dansville is located about 40-50 miles south of Rochester, NY along Rte 390. You can also access off of Rte 86 in the southern tier.
Dansville Town WebsiteDansville’s Water Cure
Thanks to Lorraine Mavins for her photography.
Peace,In emailing me make sure to change (at) to @ in the address header: madis senner
Madis Senner
Back to Mother Earth Prayers 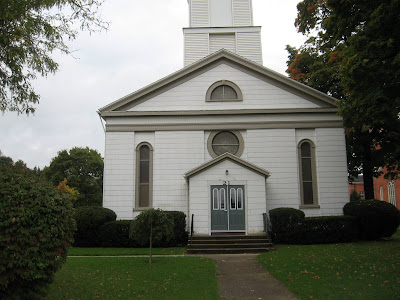 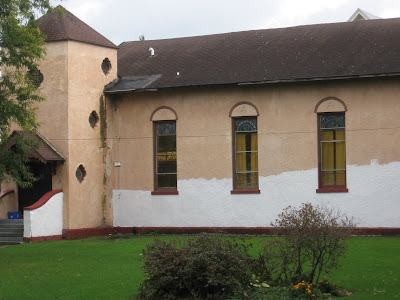 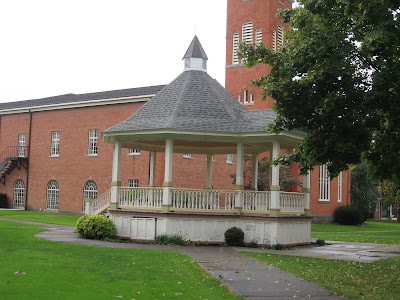 Posted by madis senner at 7:03 PM No comments: