http://www.jubileeinitiative.org/pranaflow.html
The Circulation of Prana (chi)

The pattern flow of prana in Mother Earth’s subtle body is very similar to our own. Hindu Vedanta teaches us that all is Brahman, or God, so if we are made up of the same essence whether we are human or the earth, then we should have similar structures. Like us, Mother Earth has chakras and other functions that regulate the flow of prana, only she is distributing it and we are absorbing it.
Prana is the life force that sustains us, without which we would die. Taoists and practitioners of feng shui call the life force chi, or qi. The objective of feng shui is to arrange our living environment to optimize the flow of chi to improve health and well being. Others such as Sigmund Freud’s star pupil Wilhelm Reich called the life force orgone and saw it as giving us vitality.

When prana/chi is blocked in the human body it leads to disease and possible death. Similarly when it is blocked or prevented from properly flowing in the ether around us, both we and Mother Earth are deprived of its benefits. This creates problems for both we humans and Mother Earth. 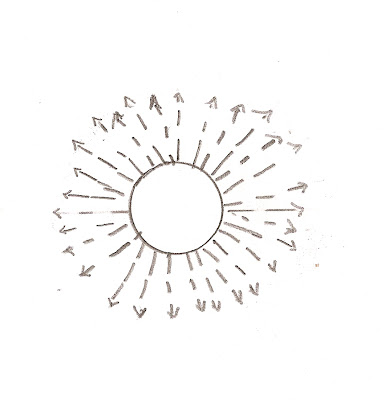 Prana circulates in the air that we breathe. In the human subtle body the air or ether through which prana circulates is called a vayu. There are a variety of vayus in our subtle body that circulate different types of prana. For example, the udana moves in a circular motion around the extremities of our arms, legs and head. Similarly Mother Earth has a variety of pranas circulating in her vayus, although it appears that they coexist in the same places and are not necessarily confined to one region as they are in our own subtle body.

All of the pranas in Mother Earth’s subtle body are regulated and circulated in the air through a series of chakras, ducts and nadis. As I note in my book The Way Home—Making Heaven on Earth the process is very similar to a heating system where ducts distribute the prana and chakras in the distance act like a cold air register that absorbs and re-circulates it. Some types of coarser prana flow through the earth to sustain it, others do not.
The Circulation Process
The most basic prana in the air around us (vayu) is responsible for sustaining humanity and the plant and animal kingdoms. It is the prana that tantrics and energy workers work with, the chi that Taoists and feng shui practitioners work with, the prana we absorb doing
pranayama and the one that therapeutic touch, reiki, body talk, acupuncturists and ayurvedic healers use. Other higher forms of prana contain consciousness or provide vitality for other purposes. 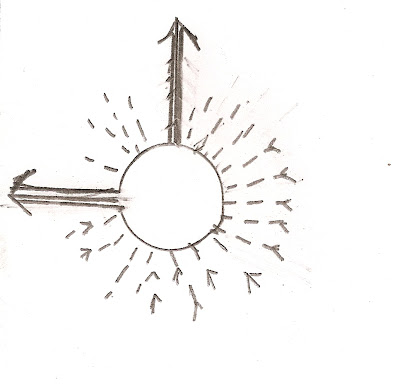 Earth Chakra:The diagram above is a top down view of an earth chakra. The vortex draws prana in (broken lines) into the earth chakra and sends into the earth where it divides into two nadis(two thick lines) that transport it a distance.
Prana descends from the heavens (vayus) above. It goes into invisible ducts that are located on the ground. Each duct distributes the prana in a 360 degree radius. This is where the prana that we absorb comes from.
Once prana is released it will continue to move in the same general direction—east, south, west and north-- towards the closest earth chakra. For example, prana dispersed towards the east will continue moving in an easterly direction and will not be drawn to a chakra in the west even if the one in the west is much closer. The distance it travels could be a few hundred feet or much further. Prana will be influenced by a variety of things that it encounters along its path and could even stagnate. Stagnating or blocked prana in our human subtle body can lead to disease and even death.
An earth chakra is what dowsers call an energy vortex and is similar to the chakras in the human subtle body. It is an invisible structure that spins in a clockwise motion (counter-clockwise in southern hemisphere) on the surface of the land. This whirling motion creates a mini-whirlpool of several feet around its center. It is this vortex that draws the prana in. 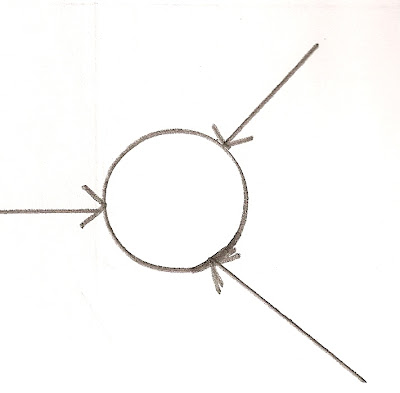 Duct with nadis flowing into it.: The diagram above is a top down view of a duct that has several nadis flowing into it. Once the prana traveling in the nadis reaches the duct it is sent back into the ether.
Once drawn into an earth chakra prana descends into the land where it divides into two energy lines that are at right angles to each other. In the human subtle body such energy lines are called nadis (meridians by acupuncturists) and they are invisible to the eye and do not necessarily have a firm structure like a blood vessel. Once prana descends into one of Mother Earth’s nadis it begins traveling in the ground pretty much parallel to the earth's surface above. It further breaks into smaller nadis that often resembles the pattern of heating coil in a seed tray warmer.
It is difficult to determine whether this prana is made coarser by the chakra before it descends into the soil or becomes coarser through its travel in the earth. What is clear is that this basic form of prana once it is in the land is much coarser and of a lower level. When I have encountered earth prana, in a ravine or large excavation where the land has been broken and opened up severing an earth nadi, it does not feel good nor is it healthy for you. This form of prana feeds plants, trees and the soil. There is another whole complex hidden architecture that gives structure to the physical earth.

Circulation of prana.: The diagram above shows the flow of prana.1) Prana descends from above into a duct.2) The duct on the surface of the earth sends the prana out into the air.3) An earth chakra absorbs the prana and funnels it into nadis in the soil.4) Prana travels through the earth via nadis nourishing all along its path.5) The flow of prana in the soil terminates at a duct that sends it back into the ether.6) Prana is recycled back to a vayu.
The nadis flow into other ducts in the distance. Each duct will have several nadis terminating at it. The prana will flow into the duct and ascend back into the air until it is recycled by descending into another duct that distributes it and the process begins again.
There are variations of this system. I have found several ducts and chakras clustered together. The process described could also be part of a larger system that has not been revealed to me. I do believe that this basic format can be found all over the world.
Peace,

Madis Senner
Mother Earth PrayersIn emailing me make sure to change (at) to @ in the address header: madis senner
Madis Senner is former global money manager turned faith based activist. In 2002 he felt called to get people to pray around Onondaga Lake in Syracuse NY, where the Haudenosaunee prophet the Peacemaker planted the tree of peace and gave us the Great Law of Peace. This began his quest in learning about and connecting with Mother Earth. A few years later he began cataloguing sacred sites in upstate NY at Mother Earth Prayers when he realized that it was where Mother Earth’s soul resides. His book The Way Home—making Heaven on Earth talks about our dynamic relationship with Mother Earth and each other. He is currently working on a book detailing Mother Earth’s subtle body. Much of his time is spent meditating at sacred sites and helping replenish those sites in need of healing. He welcomes you to visit Mother Earth’s soul to help heal the world and raise your consciousness.
Notes: Pranic Plane
The distribution and circulation of prana takes place in Mother Earth's pranic plane.
The subtle body consists of several invisible bodies, or sheaths, what Vedanta calls koshas. Similarly Mother Earth has a subtle body made up of many sheaths or what are called planes of existence.
Each plane is different and based upon a hierarchy. The physical plane, the material world where our collective conscious is currently housed, is the lowest on the totem pole. The others are progressively closer to spirit and God. Each plane coincides with a particular subtle body. There are an equal number of planes of existence and khoshas. The planes of existence inter-penetrate each other and we simultaneously interact with them all.
Our pranayama khosha regulates the flow of prana to maintain our physical body. The equivalent of Mother’s subtle body is the pranic plane. Sri Aurobindo called it the vital plane. I call it the pranic plane because its purpose is to maintain the physical plane and much of that has to do with the distribution of prana. I would include in it what Theosophists call the astral plane, or the plane of delusion and maya that deceives into believing in that the physical world is real.
Posted by madis senner at 10:09 AM 1 comment: