I came across this article today on how stone walls in New York and New Hamspshire were being used  to measure the movement of the magnetic pole over the last few centuries. You will find it below. It is a synopsis of a research project that worked with stone walls.

I often find stone walls aligned with certain energy formations in our Mother's geomagnetic field. I have never thought  of looking at them to see if they are part of the Earth Grid that aligns with the magnetic poles.

There are formations I have found that I believe are aligned with the magnetic field. But they are not too conducive to use to determine alignments with accuracy.

I DO HOWEVER HAVE A QUESTION THAT I WELCOME INPUT ON. GIVEN THE POLE SHIFT IF I FIND A WALL MAPPING OUT SOMETHING SUCH AS AN ENERGY LINES AND THEY ARE  STILL ALIGNED WITH THE ENERGY FORMATION--DOES THIS MEAN THAT THE ENERGY FORMATION DEALS WITH (POWERS, GIVES FORM TO ...ETC) THE PHYSICAL EARTH AND NOT THE MAGNETIC FIELD.

BECAUSE IF THE STONE STRUCTURE WAS ORIGINALLY ALIGNED WITH THE MAGNETIC FIELD IT WOULD NO LONGER BE SO.

SECONDLY, IF THIS IS SO COULD  THE REASON I AM NOT FINDING AN ABUNDANCE OF ALIGNMENTS WITH THE MAGNETIC FIELD IS BECAUSE EONS AGO THE PEOPLE BUILDING STONE STRUCTURES KNEW, OR LEARNED, THAT THEY MOVE?

THIRD, THIS GETS DOWN TO WHY THE POLE SHIFTS. WHY?
I DON'T THINK ITS BECAUSE OF THE MOLTEH CORE

The needle of a magnetic compass doesn't point exactly to the geographical poles, but to the magnetic poles. The angle of deviation is called magnetic declination, and its degree varies depending on where one stands on the globe. Earth's magnetic field varies depending on one's location, influenced by magnetic minerals found in Earth's crust, and also is not constant, but changes over time, probably a result of shifting currents of partially molten material in Earth's inner core. Nowadays the magnetic pole is wandering with a speed of 30 miles per year, following a straight path from the Canadian Arctic to Siberia.

To reconstruct the polar shifts in the last centuries scientists used historic ships’ logbooks, as sailors recorded the position of the magnetic poles during their travels, or magnetic minerals found in pottery, preserving the direction of the magnetic field when the clay was fired to give it a hard, durable form.

Geochemist John Delano from the State University of New York at Albany used an unusual source to reconstruct Earth's shifting magnetic field, inspired by an old map from 1790. He used old stone walls as well as old streets, built in Colonial America, to reconstruct the shift in Earth's magnetic poles over the last 300 years. Since his early childhood Delano, growing up in the country in New Hampshire, became fascinated by the remains of the walls found in the middle of the woods.  Observing a map from 1790 he realized that the stone walls form a grid pattern, marking the property boundaries of the many 100-acre farms founded here the late 17th and early 18th century. The walls were built using rocks deposited in the landscape of New York and New Hampshire by glaciers some 10,000 years ago. As the rocks make it hard to plow the fields, early colonists piled them up along the borders of their fields. Later the farmers used them to built stone walls and to mark the property boundaries. The area was finally abandoned as the young United States expanded west and better farmland was discovered. 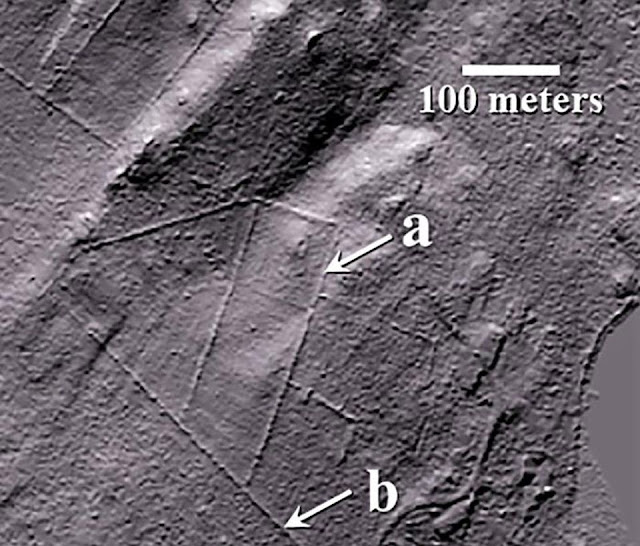 LiDAR image, where pulsed laser light is used to map the ground, shows the grid of stone walls of the former farmland, now heavily forested, near Grafton, NY.DELANO 2019

Delano studied hundreds of 17th- and 19th-century surveys from the New York Sate archives and compared them to modern aerial images to find the stone walls in the former farmland, nowadays located in the middle of a forest. At first, he measured the still standing walls using GPS. However, as this method was quite time-consuming, he acquired modern land surveys based on LiDAR technology. LiDAR images, where the landscape is scanned using pulses of laser light and special software removes the forest cover, revealed the underlying ground surface, and Delano was able to map 745 miles of stone walls. He compared the course of the walls with respect to the modern magnetic pole to compass measurements done by early surveyors. The land surveyors used a map with a reference grid disposed according to the location of the magnetic pole at the time of the survey. The stone walls were mapped and referenced according to this grid and so the maps produced are of very high precision. The stone walls were mapped with just ±0.30 degrees of error in relation to the Earth's magnetic field. One of the most detailed surveys done in 1787 placed the stone walls about 4° west of the true geographical pole; modern measurements place the stone walls about 9° west, as the magnetic pole apparently moved away from the geographical pole. Using various surveys done over time in the studied areas Delano was able to reconstruct the polar shift from 1685 until 1910.
The model based on Delano's survey confirms other reconstruction of Earth's magnetic pole shifts in the last 300 years. However, for the period from 1775 to 1810 there are small differences, suggesting that the former models need to be updated.
Posted by madis senner at 5:19 PM