Last week I took a trip to see and survey the stone mounds at Stonewall Jackson State Park in West Virginia and Ohiopyle State Park in Pennsylvania. It was part of my ongoing research effort for upcoming my book Early Woodland (Adena and Middlesex) Ceremonial Sites, due out in 2019.

My interest about these places was piqued a few months back when I read an article THE CONTINUING "STONE MOUND PROBLEM": IDENTIFYING AND INTERPRETING THE AMBIGUOUS ROCK PILES OF THE UPPER OHIO VALLEY. It told of the noble effort to get the stone mounds on Bear Knob in West Virginia on the National Register of Historic Places. Within it was a mention of Ohiopyle State Park as well as Stonewall Jackson State Park. It was the picture of a stone mound at Ohiopyle in the article, which I saw a few days ago, that piqued my interest.

I got a call that I could see the mounds this past Tuesday so I jumped at the chance. But before going there I was to stop at Stonewall Jackson State Park.

Stonewall has several trails dedicated to stone mounds. One of them is named the Cairns Trails.

Here is a press release on the cairns trail, New Cairns Trail Links Past with Present at Stonewall Resort.

Kudo's to the state of West Virginia for preserving the stone cairns and building trails for people to see and experience them. Well Done!

The Cairns Trail
Let me begin by saying that there is more to the Cairns Trail that meets the eye. Specifically, the vibe is positive to very positive in the area of the stone mounds.  Anyone familiar with my work is well aware how much credence and importance I place on the vibe, or imprints, or memories left at a place. They are a barometer that a location was used for sacred purposes. More importantly we have a potential to create a new birth with Mother Earth--an energy vortex, a water dome...---EARTH MAGIC!

Secondly, much of the mountainside that the Cairns Trail (areas C, D &E in the map below, in the upper center area) traverses is covered with stones marking energy formations such as Energy Lines. There are hundreds of such stones. All of this means that Stonewall is special and much of what was once there has been preserved. As a geomancer being able to dowse is critical to finding such stone formations and understanding what is going on. L-rods are an invaluable tool. 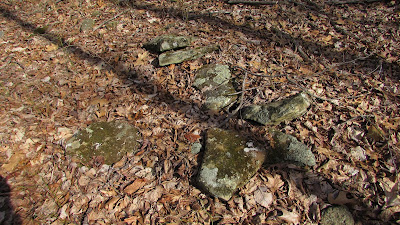 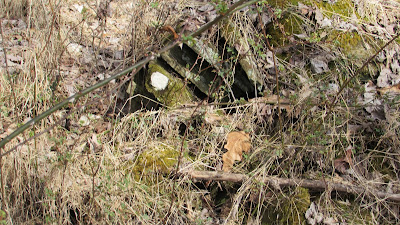