I will be joining other authors for a book signing (Sacred Sites in North Star Country) at the Peterboro Civil War Weekend. 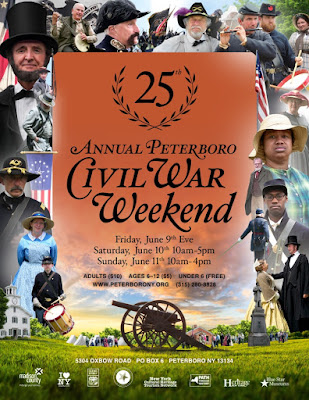 The 25th Annual Peterboro Civil War Weekend June 10 and 11 will feature the relationship of John Brown and Gerrit Smith who were determined to abolish slavery.

Dr. Dann will describe the events leading up to Harpers Ferry in 1859. The catalyst that brought Smith to Brown’s attention was Smith’s endeavor to assure voting rights to black males by providing 40 acres of land to 3,000 African-Americans. This project in the Adirondacks came to be known as Timbuctoo, and after years of research the John Brown Lives organization has created a travelling exhibit Dreaming of Timbuctoo which will open in Peterboro for Civil War Weekend. Events will include a Civll War battle re-enactment.

Peterboro is located in northern Madison County not far from Cazenovia. It is home to the Gerrit Smith Estate and the Abolitionists Hall of Fame.

Authors of Civil War and regional history publications will assemble at the 25th Annual Civil War Weekend on June 10 and 11, 2017 to exhibit, sell, and sign their publications, and to present on their research and writing.

June 10, opening day of the 25th Annual Peterboro Civil War Weekend, will also be the first day of publication and release for A Final River to Cross: The Underground Railroad at Youngstown NY. Gretchen A. Duling PhD and Dennis C. Duling PhD are bringing their brand new book across the state to debut in Peterboro NY, an official site on the county, state, and national Underground Railroad trails. After years of research, the Dulings have provided a source book with extensive footnotes and bibliographies that add to the studies of trails of freedom in NYS – as well as accounts of fugitives and sites in that region.

Michael Keene returns to Peterboro with a new publication and MP3 audio book Vietnam Reflections: The Untold Story of the Holley Boys. These eight young soldiers from the small rural community of Holley were awarded 40 medals for combat and valor. Finally the story of these men is being told extensively and with sensitivity. Keene served two tours in Vietnam with the U.S. Marine corps. He is the author of six books about New York history, including The Psychic Highway: How the Erie Canal Changed America – a great read during this year of the Bicentennial of the beginning of the Erie. Keene is the producer of the award-winning historical documentary Visions, True Stories of Spiritualism, Secret Societies & Murder.

Jean Libby has researched John Brown - especially his family in California – for decades. She has searched for direct descendants of the Browns and brought them to the legacy cause. Such a great-granddaughter was Alice Keesey Mecoy who presented at Peterboro’s Living History several years ago. Libby searched for portraits of Brown and compiled a timeline of his images which was on exhibit at Harpers Ferry WV. Libby’s John Brown Photo Chronology provides a meaningful resource – especially at the event recognizing the Gerrit Smith-John Brown relationship and the Dreaming of Timbuctoo, and exhibit from John Brown Lives! The publication is available at the Peterboro Mercantile tent on the green and is available at mercantile.gerritsmith.org.

Neil MacMillan will be presenting at 4 pm on Saturday, June 10 on his newest book Haunted Onondaga County, but will also include his other two books Crossing the Line and There I’ll Be a Soldier. MacMillan has been studying and reenacting Civil War History for nearly three decades and turned to writing a few years ago. MacMillan is also the Captain of the 12th US (Reenacting Unit) and has attended the Peterboro event for years for the weekend event and for Living History Day. He provides specialized programs during the event and has a good time engaging youth on history. Popular with his army colleagues and the public, MacMillan is a great story teller on the field and in his books.

A volunteer at the 2016 event, Mishell K. Magnusson returns this year to describe the locale of her 2012 publication Images of America: Madison and Hamilton and to explain the Town of Madison’s special location in the center of the state and its impact on the Civil War because of the Chenango Canal. The book is packed with photographs of the area in which Mishell has been a lifelong resident which she supports with her membership in organizations and as past president of the Madison County Historical Society. Mishell is the owner of KJM Consulting & Training, Inc. in Munnsville, New York.   In addition, Mishell has worked as an Adjunct Professor for Mohawk Valley Community College; Bryant & Stratton College; Madison/Oneida BOCES and State University of New York (SUNY) Oswego.

Frank Meredith will present on Being True to the History in Historical Fiction. Meredith’s The Unfinished Work is an historical fiction publication that includes forty rare illustrations and pictures, with maps by prominent Civil War cartographer Steven Stanley. Frank’s second publication The Battle of Gettysburg as Seen by Two Teens: The Stories of Tillie Pierce and Daniel Skelly is a non-fiction book which includes maps, photographs and full reprints of the dramatic eyewitness accounts of a 15-year old school girl and an 18-year-old store clerk. Meredith has been a Civil War buff since 1963, when as a nine-year-old boy he witnessed the 100th anniversary reenactment of the Battle of Hanover. Awarded a doctoral fellowship in conducting, Meredith has taught music at the pre-school through graduate school levels, and served on the New York State School Music Association executive board.

Ellen Mae Knapp Patch of Endwell NY inherited letters saved by her grieving grandmother during the Civil War. Patch transcribed, researched, and annotated the 59 letters, and the Broome County Historical Society published This from George: The Civil War Letters of Sergeant George Magusta Englis 1861-1865 Company K, 89th New York Regiment of Volunteer Infantry known as the Dickinson Guard. The 288 page book is filled with pictures, charts, and maps that illuminate the Civil War soldier’s letters home. Patch is a graduate of SUNY Potsdam and a retired educator.

The Veteran in a New Field: A Civil War Mystery of the Irish Brigade is set in 1866, a pivotal year. Author W. H. Allen states, “It is a time remote to us now and yet it is still tangible to 21st Century Americans.” Allen knows his subject well: He served in the Marine Corps in Vietnam and in the 10th Brigade of the NY Guard. With degrees in history and sociology he had a 42 year career in law enforcement and criminal justice, interviewed veterans for the Library of Congress, collected for exhibits in the NYS Military History Museum, was inducted into the NYS Senate Veterans Hall of Fame, and volunteers for Civil War programs – as he will do at Peterboro Civil War Living History Day. Bill returns to Peterboro after mounting an exhibit in years past at the event.

Madis Senner’s recent publication Sacred Sites in North Star Country tells how the land influenced the dramatic social changes that took place in greater NYS that shaped the world. Senner, a money manager turned keeper, says “Upstate New York was the birthplace of the Women’s Movement and American Democracy, as well as the home to America’s Second Great Awakening. It has been called the Burned-over District for its spiritual wildfires and America’s Psychic Highway. It is a place where prophets walked, religions were born and great souls lived,” – including Gerrit Smith and Peterboro.

Jane Spellman retired as the Director of the Herkimer County Historical Society in 1995 having served since 1971. She attributes her love of history to her parents who were both lawyers and interested in the past. Spellman has written four books, and published twenty-two as editor. In preparing for Herkimer’s bicentennial Jane examined previous histories of her county. She discovered there was minimal inclusion of women and so commenced her research which led to Women Belong in History Books, 1700-1950 (Volumes 1 & 2).

With degrees in mathematics and business administration, Sandra Weber’s career is now writing and presenting history from the Adirondacks. Weber has written many books for children and adults and does dramatic portrayals when she presents her books. She generously offered three presentations for the 2017 Peterboro Civil War Living History Day for area fifth graders. Breaking Trail: Remarkable Women of the Adirondacks was written with fellow author and performer Peggy Lynn after digging through archives and recovering pieces of women’s history. The book proclaims that “mountain women can be heroes” and describes the courage, intelligence, fortitude, and backcountry buffoonery to prove these heroes. Weber will also speak on the recently published A History of Adelaide Johnson’s Portrait Monument to Lucretia Mott, Elizabeth Cady Stanton and Susan B. Anthony at the United States Capitol.

Authors’ exhibits are  in the Peterboro Mercantile tent just inside the Main Gate of Civil WarWeekend. Authors will provide thirty minute programs on their research, writing, and publications, and will sell and sign their books. Norman K. Dann’s books on Peterboro will be available at the Mercantile, and he can be found throughout the weekend managing the grounds of the event. Dann’s biography of Gerrit Smith addresses the Secret Six supporters of John Brown, and Dann will present on Gerrit Smith and John Brown at the Dreaming of Timbuctoo exhibit in The Barn at the Gerrit Smith Estate on Saturday morning June 10 at 11:00 am.

Also on display at the Mercantile will be a gift from Kris Richardson to the Civil War Weekend effort in memory of her son Todd Richardson whose hobby was Civil War History. The book Discovery in the Attic: A Family’s Shared Past Revealed is signed by the author Rosalie Rymarski.


Special features of the 25th Annual Peterboro Civil War Weekend are programs on women in the Civil War, the relationship of John Brown and Gerrit Smith, and Dreaming of Timbuctoo, an exhibit on Smith’s gifts of 40 acres of land to each of 3000 African-American men.  Admission of $10 for adults, $5 for ages 6-12, and Free for children under 6, includes eleven acres of the encampment, three museums, historical, military, and authors’ programs, an afternoon musical presentation, children’s activities, skirmishes, exhibits, displays, walking tours, and demonstration. For the 25th year of the Peterboro event, a limited number of half price adult tickets are available from mercantile.gerritsmith.org, at the Deli on the Green, and from members of the event committee.
A showing of the Union Bound, the 2015 movie based on the diaries of Joe Hoover of Herkimer, will be shown on Friday, June 9 a 7pm Admission is $5 per person. The 77th Regimental Balladeers will perform a concert Saturday night June 10. Admission for the concert is $5 and free for reenactors, participants, and registered weekend volunteers.