HIgh Tor's Stone Mounds--Please SEND A COMMENT TO THE DEC, Life in the Finger Lakes Magazine

I will occasionally be blogging for Life in the Finger Lakes magazine. I submitted a few articles to them which they accepted; one of them is below. They said they would like to see  more.

They have an app which you can sign up for to see my and others articles at, https://www.lifeinthefingerlakes.com/high-tors-stone-mounds/

The following is about the Stone Mounds at High Tor NYS DEC Wildlife Management at the southern end of Canandaigua Lake. I ask that you please consider sending an email to the DEC asking them to put special protections on the stone mounds. It can be something simple as, "Please protect the stone mounds at High Tor,' Janice Clip, 56 Rain Str, Syracuse, NY, 13205.
Please email the DEC; R8.UMP@dec.ny.gov

To Learn More, http://www.hightor.org
My Clarks Gully Blog contains lots of pictures of the stone mounds at High Tor, http://clarksgully.blogspot.com 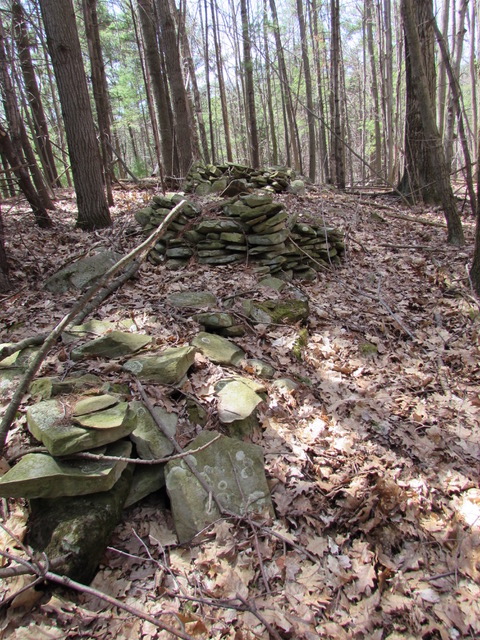 Who built all the stone mounds at High Tor NYS Wildlife Management Area at the southeastern end of Canandaigua Lake is a question Dave Robinson asked over 30 years ago and a question that has been dogging me for over a decade. There are hundreds of stone mounds at High Tor in a variety of shapes and forms, with the dominant one being a stone mound with a dimpled or depressed area in its center. As someone who studies and has written about stone structures and sacred sites, I know of no other place in the world that has such a large collection.

Robinson was an amateur archaeologist and member of the New England Antiquities Research Association (NEARA), which is dedicated to the study and preservation of ancient stone structures. He wrote several articles about stone structures in the Finger Lakes for NEARA and for the Crooked Lake Review.

Robinson persuaded an archeologist from the New York State Department of Archeology in Albany to look at a few of the stone piles at South Hill within High Tor. The archaeologist concluded that the piles of stones were not the result of field clearing, but that the stones had been stacked up to form small platforms.

Robinson believed that the stone structures at High Tor were built by the Adena (1,000 BCE to 0 CE). An ancient Native American culture based in Chillicothe, Ohio, in southeast part of the state. Their culture covered an area about  150 miles around Chillicothe. The Adena, along with the Hopewell who followed them, are known as the "Mound Builders" because of their practice of burying their dead in large earthen mounds.


Given that the Seneca believe that they were born on South Hill, why would Robinson conclude that someone else built the stone mounds? 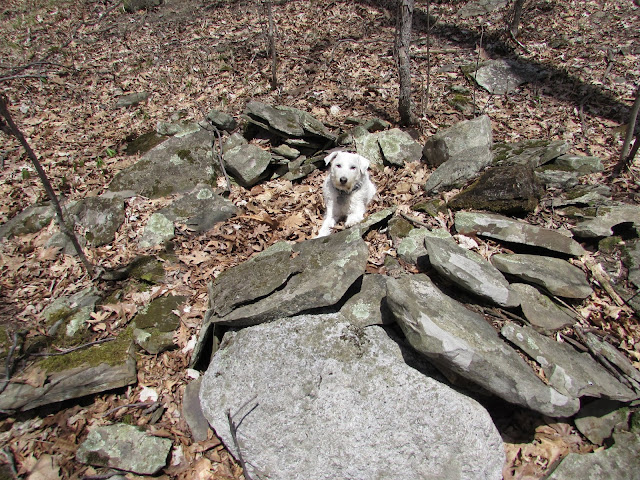 To answer that we turn to two of the Finger Lakes' famous sons.

Arthur C. Parker (1881-1955) was a Seneca who descended from the prophet Handsome Lake and whose father was Ely Parker, the Commissioner of Indian Affairs for President Ulysses S. Grant. He is widely respected for his archaeological work, and did much to educate the public about Native Americans—through his books and through the formation of the Society of American Indians. He lived in Naples, NY, close to High Tor.

Parker was the director of the Rochester Museum of Arts and Sciences from 1924 to 1945. During his tenure, he ordered an examination of a deceased Native American who had been discovered in 1904 at the bottom of Bare Hill, inside the steep hairpin curve on the North Vine Valley Road in the town of Middlesex a few miles from High Tor. The fellow was found sitting half way up, with one hand holding a pipe. The pipe was determined to be of Adena origin and so it was concluded that he was Adena.

But was he? Or was something else at work? After all, the Adena culture was supposedly confined to the area of greater southeast Ohio.

To answer that question we turn to William Augustus Ritchie (1903- 1995), who worked for Parker at the Rochester Museum at the time.  Ritchie performed over a hundred excavations and was known as a “dirt archaeologist,” preferring to view evidence first hand and to see its relationship to features in the land. He coined the term “archaic” to describe the early development of cultures in the northeast, a term which is widely recognized today. He served as the NYS Archaeologist from 1949 to 1972. He received numerous awards for his work and was loved by many for exposing many of the mysteries hidden in New York and Eastern America.

The fellow found in the Vine Valley along the eastern shore of Canandaigua Lake led Ritchie in 1937 to develop his concept called the Middlesex Focus, Middlesex Phase, or Middlesex Complex after the town where the Adena man holding a pipe was found. Ritchie hypothesized that many of the sites found throughout Eastern America and southern Canada that exhibited Adena-like mortuary practices did so because of the interactions between various Native American cultures during the Early Woodland Period (1,000 BC to 0 AD.) In other words, because of trade, travel, and communication between culture, practices, customs, and artifacts became intermingled.

So when a site was found exhibiting Adena-like mortuary practices or artifacts, it began to be referred to as a Middlesex Focus site, after the town of Middlesex, NY. The term is still employed today.

Ritchie expanded his Middlesex Complex hypothesis to say it was actually the migration of Adena, not interactions between cultures that was behind the Adena mortuary practices and artifacts found far from their base in southeast Ohio. Later, his partner in this hypothesis, Don Dragoo, changed his mind and recanted his belief in the migration theory.

So High Tor has a very rich history. It straddles the towns of Middlesex and Naples and is a stone’s throw from where the original half-seated Native American was found.

It is extremely likely that the stone mounds in High Tor were used for ceremonial purposes. There is a certain “je ne sais quoi” about the mounds and all of High Tor (the geographical space) -- what some may call its "vibe." Whenever I visit the area, I say a prayer or bring an offering, and often meditate to show reverence and respect. I ask that you consider doing the same when you visit. Treat them as if they were holy. 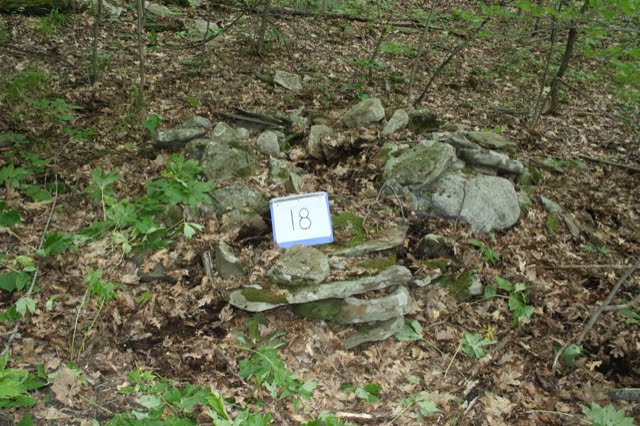 I write about the stone mounds at this time because NYS DEC opened up a public comment period this spring regarding High Tor’s future use. While the stone mounds are not a typical issue, and they do have some protections, we can never be too safe. You might contact the NYS DEC (email R8.UMP@dec.ny.gov) and ask that added protection measures be put in place to protect the stone mounds within it.

While it might seem that placing extra precautions to protect the stone mounds is a bit too much, I will point out two things.

In his article for the Crooked Lake Review, which talks about the stone mounds at South Hill, Robinson tells how two stone walls along Bare Hill that he assumed were associated with an old Adena Fort were taken by the town of Middlesex Highway Dept. in the 1920s and used for fill.

Similarly, Jason Jarrell, who lives in West Virginia, told me earlier this year that hundreds, if not thousands, of stone mounds that once lay on mountain tops in West Virginia were destroyed during clear-top coaling mining operations in recent years. Jarrell and his wife, Sarah Farmer, study and write about ancient cultures and are regularly featured in Ancient America, a magazine I have written for as well.

Interestingly, West Virginia has created several trails dedicated to observing stone cairns within Stone Wall Jackson Lake Park. Perhaps they provide a model for the preservation of the stone mounds at High Tor and an avenue to generate tourism and be of economic benefit to the area.

I encourage you to visit High Tor for a walk in the woods and soak up the wonder of its many stone mounds. They are all over. Try as the Native Americans say to “act in a sacred manner” when you are there and treat everything with reverence and respect. And please email the NYS DEC (R8.UMP@dec.ny.gov) and tell them to protect the stone mounds at High Tor.

To Learn More
www.hightor.org
http:/ /clarksgully.blogspot. com, posts of pictures back to 2007
Sacred Sites in North Star Country: Places in Greater New York State (PA,OH,NJ,CT,MA,VT,ONT) That Changed the World, by Madis Senner has a section dedicated to High Tor

Herbert C. Kraft, ‘A Tribute to William A. Ritchie and Louis A. Brennan’, The Bulletin, New York Archaelogy, Number 113, 1997