ASD Article-Challenges of Dowsing Ruins and Complex Stone Structures: How Did the Ancients Do It?

The following appears in the summer issue of the American Society of Dowsers Digest.

Challenges of Dowsing Ruins and Complex Stone Structures:  How Did the Ancients Do It?

Three of us from the Finger Lakes Dowsers Chapter, Janice Carr, Peter Shell (photographer), and myself, have been surveying and cataloguing a section of the High Tor NYS State Forest at the southern end of Canandaigua Lake.  We call this the Ledges Area[1] because of its many ledges or large terrace-like steps at the side of South Hill.  We thought there were about 30 stone mounds, but as we continued we found many more, several of which were merely rubble.  We also found some incredibly intricate stone mounds that mark the intersection of energy lines (or ley lines) so numerous that they appear to be like a mass of ganglia.

We wondered who constructed the mounds.  Clearly they are pre-Iroquois stone structures as we don’t see this pattern from the Haudenosuanee.  They may have been created by the Mound Builders[2] or earlier civilizations.  But the larger question is, did they use some sort of dowsing device?

Is it Rubble or a Stone Mound?

One of the biggest decisions we faced was what to include as a stone mound in our catalogue.  Although we surveyed and photographed many stone mounds, the Ledges Area is noted for its covered earth chakras.  Earth chakras pull in energy (e.g., life force, prana, chi, orgone) across the surface of the earth.  An earth chakra consists of a spinning vortex above ground and two perpendicular energy lines in the earth that carry away the energy once it passes through the vortex[3].

The Case of Stone Mound Number 6

The best way to explain our challenges is to look at a few pictures of the mounds.  Mound #6 (see Photo 1) is a pile of rubble.  On visual observation, no one would say that it was a stone mound.  But it is on an earth chakra and several interesting things are associated with it, such as upright stones and vortexes. 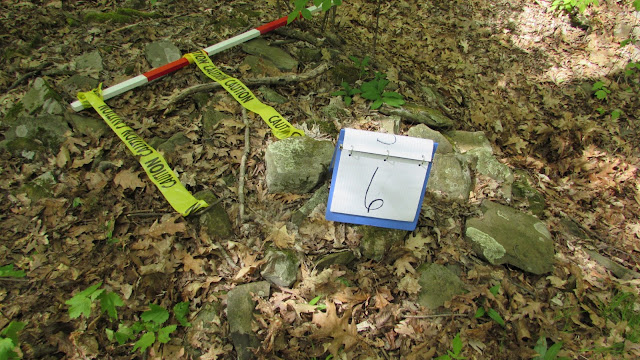 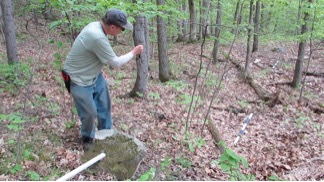 Stone mound #16 (Photo 3) is incredible.  It is a stone circle with a hollowed-out center and a narrow entryway, almost as if the stones are a wall around the center.  We imagine that spiritual pilgrims would sit in the hollowed-out center. 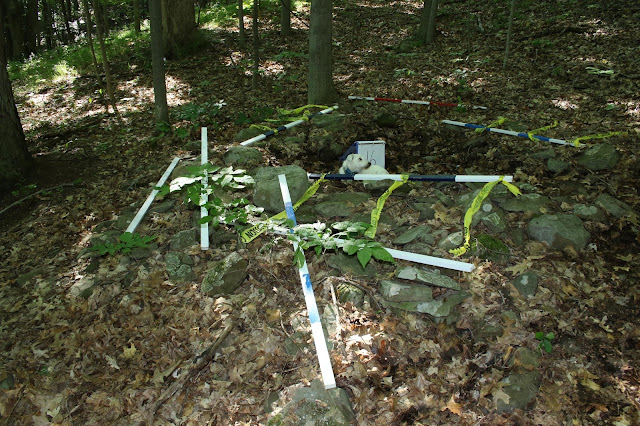 By the time we got to stone mound #16, we had learned many things that helped our survey.  For example, we realized that just about every area/stone had a purpose.  When you look at #16, you see that the width of the circle on the left is much wider than the other side.  We believe it was widened to accommodate another energy line (white staff parallel to a main energy line).  Although difficult to ascertain in Photo 4, it seems the stones in the circle were elevated to highlight the energy lines. 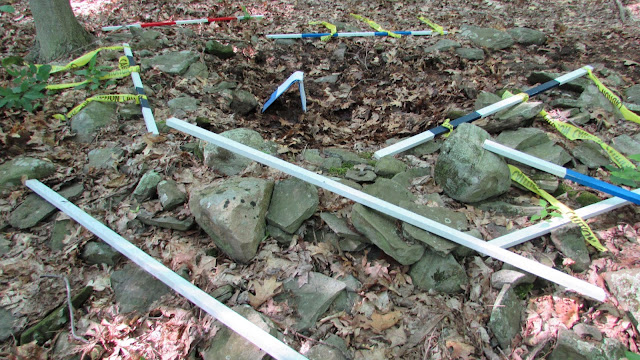 Did the Makers Have Dowsing Tools?

How did they do it?  I pulled my hair for 30 to 40 minutes setting up the staffs to photograph mound #16, and had similar experiences with several other mounds.  My anja (or third eye chakra) was in overdrive, and when I went into the center of a stone mound it seemed that my head might explode.  What about the ganglia of energy lines intersecting in close proximity?  Perhaps there was a shaman or shamans who were clairsentient.  I imagine that Mother Earth’s energy field was much more potent then[5], perhaps making things more distinguishable for someone sensitive of space.

I believe they must have had some dowsing tools, because mapping out such a complicated structure takes skill and the right tools.  But what were the tools?  Does anyone know of an archaeological dig that references dowsing devices?  If so, please send a "Letter to the Editor" so that we may all learn.

It’s All About the Vibe

While I have written about the workmanship of the stone mounds in the Ledges Area, the real appeal and magnificence of the area is its vibe.  It has been a sacred site for thousands of years.  Spiritual pilgrims must have visited to do ceremony, pray, and give thanks.  This left powerful imprints on the land that can provide mystical experiences, answer questions, etc.  Fortunately, the Ledges has not been contaminated with consciousness of thrill seekers and tourists, so it has remained pure and focused on the divine, the sacred, and Mother Earth.

If a space is to retain its sacred vibe, it must be exercised like a muscle, through meditation, prayer, and ceremony.  Visitors must act in a sacred manner while at such sites, and keep gawking (e.g., taking photos/focusing on the mounds) to a minimum.

I have posted several videos about our survey to www.youtube.com/user/MotherEarthPrayers, and more will be posted soon.  You can also access my blog for more information and photographs of High Tor at www.clarksgully.blogspot.com.

Remember when visiting this sacred site to bring an offering (tobacco, flowers, etc.), and spend time in the Welcome Area to pray and smudge yourself.  While there, act with respect and reverence, and in so doing, you will honor every pilgrims who have visited, you will honor our divine Mother, and you will raise the vibe ever so slightly.  Remember it’s all about the VIBE!

Join us in helping to preserve the vibe and mounds at High Tor by writing to the NYS DEC commissioner.  For more info go to www.clarksgully.blogspot.com.

[2] David D. Robinson makes the case that the Mound Builders  (Hopewell, Adena) created the mounds in Who Built the "Old Fort" on Bare Hill  and other Pre-Seneca Structures in Yates County, N. Y.?.  The Crooked Lake Review, Spring 1997, http://www.crookedlakereview.com/articles/101_135/103spring1997/103robinson.html.

[4] Learn more about energy vortexes in my article in the 50th anniversary issue of the ASD Digest, or read my book, Vortices and Spirals, Unlocking the Mystery of Our Dynamic Relationship with Mother Earth.

Madis Senner is a former global money manager turned Seeker.  He is a Keeper, watching over and spiritually cleansing/enhancing several sacred sites.  Sacred Sites in North Star Country, is his fourth book and available for purchase through the ASD bookstore.  You can read his musings at www.motherearthprayers.blogspot.com.